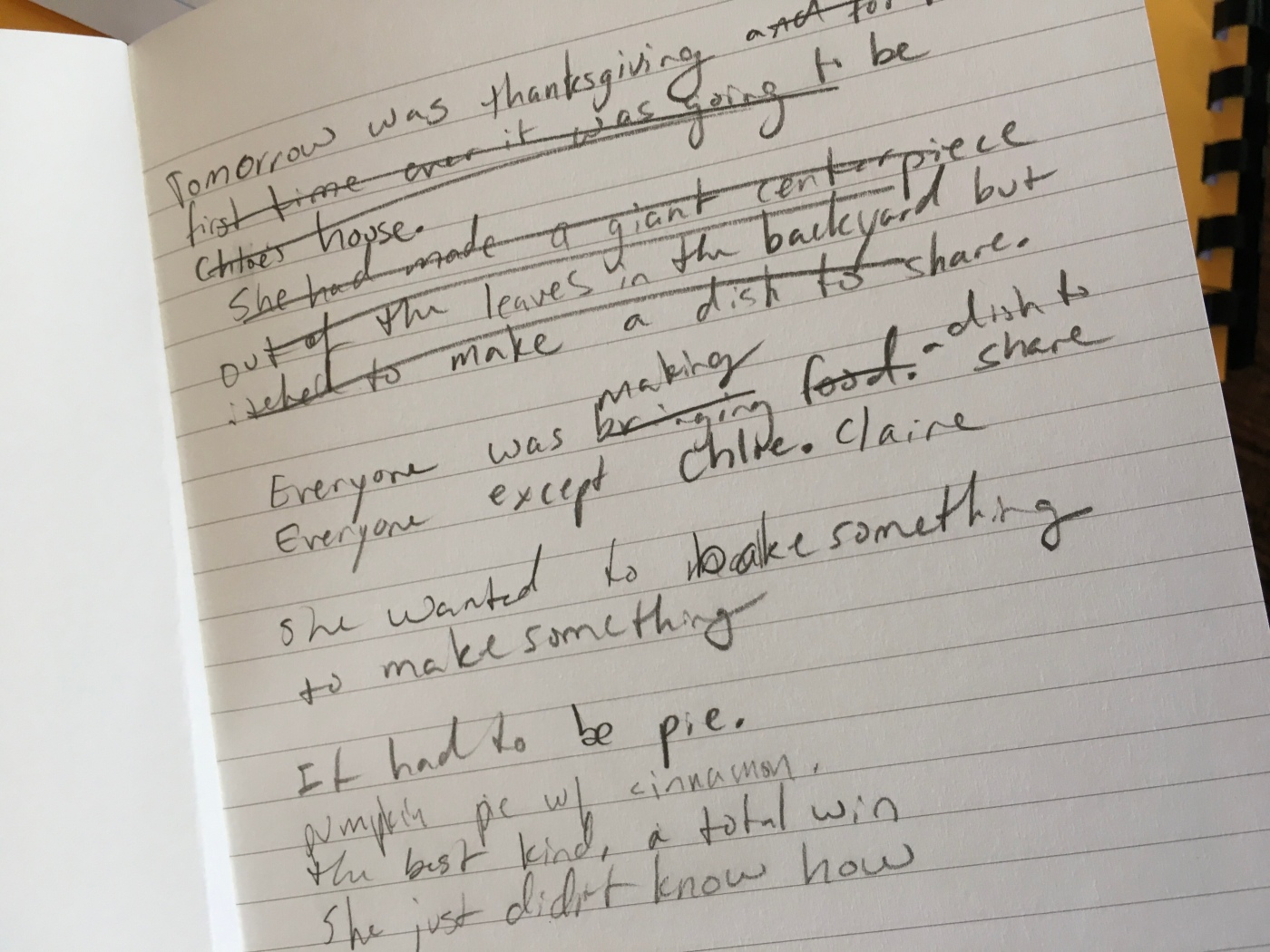 Drafts are usually pretty quiet things. They come out and serve their purpose in helping fine-tune the story and then are put in a back drawer or forgotten folder or deleted off the computer. But in the spirit of trying something new and writing from a contest prompt that ended up with Thanksgiving Pie I thought it could be fun to share some of the changes along the way that can happen even in under 200 words.

The prompt photo was of pumpkin pie and as I saw it the thought of “what would happen if someone had forgotten to add the sugar to the pie,” and that was the hook that started the story.

I don’t tend to write in rhyme but the line couplet below about the sugar from the first draft was the first section written and so I tried to make the rest work around it.

“I really want to make a pie.”
“Make a pie? Oh, tell me why.”
“Everyone is bringing food but me.”
“Because we’re only kids, you see.”
…
But when it came time to eat
There was no sugar, it wasn’t sweet.

As a first draft it was rough and inconsistent with gaps in the story that didn’t make sense for a reader. It was a first draft, though, and that’s the point. They’re just supposed to be, not be good. If they are good that’s a bonus.

Below is a revised rhyming version. It transformed out of being primarily conversation into primarily narrative. The story was more consistent and it was okay. But I still wasn’t happy with it because it was only okay and I knew there was something off but I couldn’t put my finger on what that was.

Thank goodness for critique partners, they were all able to easily point out what I, in my familiarity, couldn’t see yet: the meter and rhythm were all over the place. In trying to match the story to the first hook, I walked the path of poetry but the story was serving the rhyme instead of the other way around.

Thanksgiving dinner would soon be here
With fun food and delicious cheer.
The kids wanted to make a pie
All by themselves, at least to try.
…
But when they went to slice and eat
There was no sugar, it wasn’t sweet.

It’s bad poetry for a picture book level because it would drive the adult reader nuts as they tried to make it sail along and bounce.
It might be my darling and my downfall, but I couldn’t give up that first hook.
Instead I rewrote it in prose with occasional, but regular, rhyming asides. It’s still not perfect, but perfect (or close to it) takes time and setting it aside to look with fresh eyes. What it is is nice and happy, and that’s good enough for me.

One thought on “The Art of the Draft, Fall Writing Frenzy”